We've watched a couple of excellent Indian films recently. Firstly, My Name Is Khan, featuring George W. Bush, Barack Obama and Shahrukh Khan (who actually manages to do some acting, which is astonishing). A study of autism and terrorism. 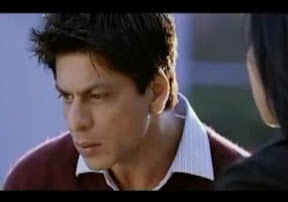 Secondly, Guru which has Big B's son doing an excellent bit of acting as a Gujurati cloth businessman who has a stroke after getting exposed for corruption but fights back in an excellent courtroom speech climax. Topically it manages to skewer the paradox about big business and corruption, namely that businesses need to get their way to make money for the people whatever the cost, but a country can't allow corruption because everything goes wrong. (Likewise in A Few Good Men where Jack Nicholson points out that we need psychos on the front line to defend us rational people.)

(Normally I would call these films "Bollywood" films but (as an outsider) I'm beginning to think that that term is better reserved for the colourful singing and dancing films. Guru has songs and dancing but maybe it's vestigial and there's a new wave of more thoughtful Indian film-making, harking back to the days of Satyajit Ray and the social conscience of Raj Kapoor.)

(Both of these films recommended by my sister-in-law Pari - thanks!)

This is a wonderful story:

Go and read it straight away!
(via mefi)

I've been doing something along these lines myself recently: 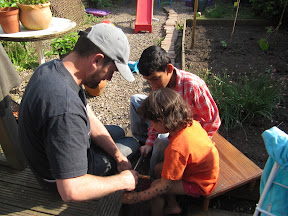 Ashi said he wanted to build a table, to learn about how to do it. Mostly I think because he is irrestibly drawn to powertools, like any young person. We found some thick dowels that had been part of a clothes horse, and are cutting them to size in this photo. We're all holding the saw to 'help' which makes it really hard to cut a straight line! 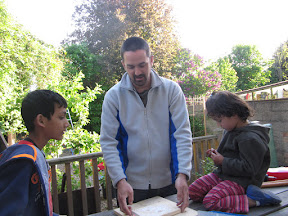 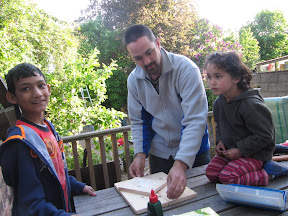 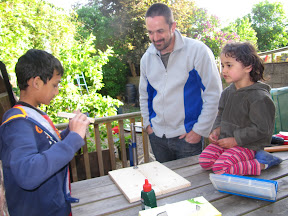 Ashi glueing the underside of the tabletop before screwing. 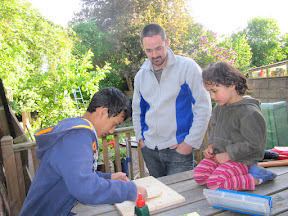 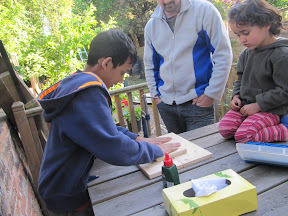 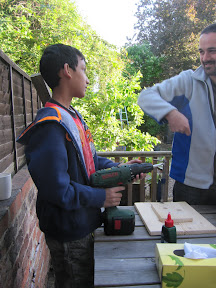 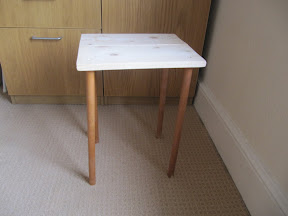 The finished table. A bit wobbly but fully functional. It has been in constant use ever since as Mnki's bedside table. 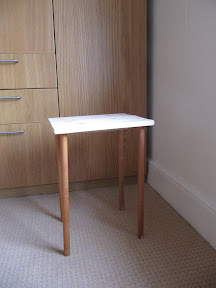 I often catch myself wishing for a science of morality, something to settle thorny political problems once and for all. Clearly this is absurd. However, a few simple what-if questions can map out the territory of possible moralities by signposting different directions. (These aren't the sort of questions that have answers, unless you consider these questions themselves to constitute an answer, which of course is itself a question for you to decide.)

It cannot be established scientifically that our universe is real, by definition, so this has to remain an open question. You are entitled to believe that you are the only real person in a simulation created for your benefit (or as punishment). You may even be right.

1) What if you'd been born as someone else?

It's the lottery of life that some be born into riches and others into poverty. The Veil of Ignorance idea suggests that we should build our social systems upon empathy with the legions of unborn children who have yet to draw a straw, and try to at least create conditions of equal opportunity for them. I think this question more than any other separates us morally - some people just don't accept the premise and answer 'well I wasn't' and suffer inequality to exist.

But if you accept the thought experiment then consider also this: could you have been born as an animal? Or as a plant? If you'd been born as a plant, would it matter to you if you were killed?

2) What if everyone acted in the same way as you?

This is of course the golden rule, expressed as a question. And it's a double-edged sword: not only should you not be selfish but also you needn't be too generous. If everyone gave all of their money away we'd end up in a very horrid world where everyone would have to be a monk and no-one got to do what they wanted. [1]

The rather obvious answer is that the world would have carried on in its usual stumbling historical fashion. But since, undeniably, you have been born, you might as well do something, even if it means having a lazy day in bed.

These are important questions and it's tempting to suppose that a common set of answers might be the basis for a universal morality. But all of this, even the questions themselves, are rationalising-after-the-event (not to mention pompous): As studies into what's called social intuitionism show, when presented with a moral situation we first have an emotional response, and only afterwards do we (sometimes) think through a logical framework for those feelings. In other words, our morals don't come from a set of moral theories, as one of H. G. Wells' characters points out in Ann Veronica (1909):

"There's no sense in morality, I suppose, unless you are fundamentally immoral." text

Here's a picture of the moon. That splat on the bottom is Tycho crater, a relatively young impact.

The crater is about 82 km (51 miles) across. (Bristol to London is about 100 miles. The M25 around London would fit neatly inside the crater.)

The radial lines are exactly what they look like: debris from the impact.

Here's a closeup of the crater: 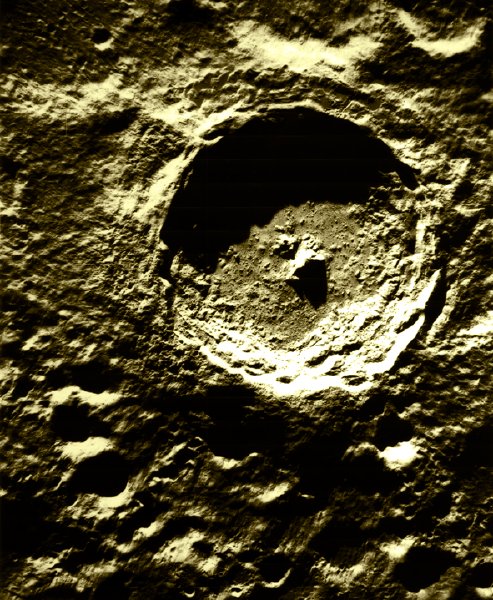 Impact craters often have a central peak like this, caused by material falling back after being flung out.

Here's a closeup of the tiny white dot on top, which is a boulder about 100m across.

Here's a closeup of the boulder, taken from above:

The album has the details and more pictures.

It's nice to make something with a curve, I've been thinking about that for a while. Some of the things made with steam-bending wood and wicker are amazing.

The design is available to play with in Google SketchUp: Pod Shed (Although, as Mnki pointed out: "Did you look around for a design to start with?" No. "Do you expect anyone to use your design?" No. But it's the same reason we blog at all - there may be 6 billion people on the planet at the moment but there's enough variety in life for everyone to have something to say, or to make something, however small.)

The idea came from the camping pods which are getting a lot of press coverage recently, although I'm using an ellipse instead of a pointed arch.

Just finished reading the Baroque Cycle, Neal Stephenson's wonderful romp through the 18th century. The three books are a prequel to the equally awesome Cryptonomicon which is set in more recent times. Here are all four books stacked on my bookshelf: 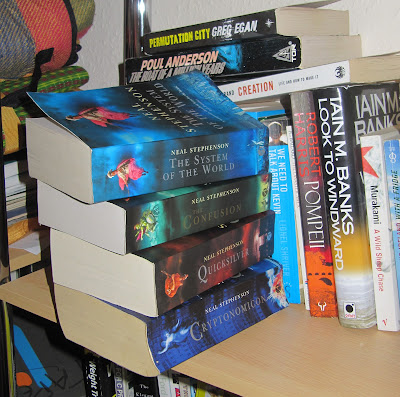 Reading it on holiday:

If you've read any Robert Harris and enjoyed his alternative history novels like Fatherland or Archangel then these books might appeal. The sheer amount of scholarship that's gone into them is mind boggling, and matched only by the sheer amount of fun that the characters get up to.

* That picture seems to have included many of my favourite books in the background - except We need to talk about Kevin - I don't remember reading that yet.

June 2008
Chris King starts working full time on the tapes. He has been booked for three months. The only problem is that none of the promised new tapes have arrived. Thierry says he is still trying to sort them out. He isn’t quite sure where they are, or how many there are, or what’s on the ones he has got. And he says he has to make copies of all of them before sending them. I tell him that will take too long and he just has to take a leap of faith and send them. [1]

We're watching Exit Through The Gift Shop at the moment. It's an astonishingly good documentary about the street art movement and Banksy.

The film only happened because the film-maker, Thierry, has a personal obsession with filming stuff to avoid losing his memories, and had accumulated several years worth of footage before deciding that he ought to perhaps do something with it all. He (reluctantly) hands over boxes and boxes full of video tapes, having made no effort to edit or organise or often even label them. A bit like Kubrick's famous boxes (another excellent documentary) containing endless painstaking research, only the opposite.

'There's a cellular automaton called TVC. After Turing, von Neumann and Chiang. Chiang completed it around twenty-ten; it's a souped-up, more elegant version of von Neumann's work from the nineteen fifties.'
...
She said, 'Chiang's version was three-dimensional, wasn't it?'
'Much better. N-dimensional. Four, five, six, whatever you like. That leaves plenty of room for data within easy reach.'
...
In the throes of reproduction, each processor could be seen sprouting hundreds of pairs of fine red and green 'construction wires', which grew straight out into the surrounding empty space - until they all reached the same predetermined length, abruptly turned a tight one-hundred-and-eighty degrees, and then started growing back in the opposite direction.
...
In close-up, the wires resolved into long lines of cells marked with arrowheads, some rendered in the brighter hues which represented activated states.

As far as I know, this is the only appearance in fiction of von Neumann's cellular automaton. You can see the 'arrowheads' and 'construction wires' and 'brighter hues' here:

Of course, 2010 has come and gone and Chiang's version didn't appear. A guy called Will Stevens did make a 3D version of the CA in 2010, which is pretty awesome. Here it is making a copy of itself:

Also in 2010, Adam Goucher worked on a replicator in my own 'souped-up' version of von Neumann's rule. It looks like this: 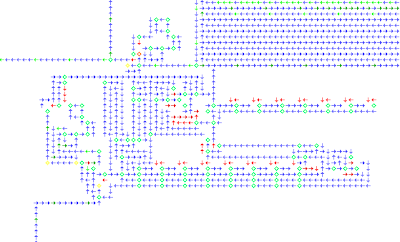 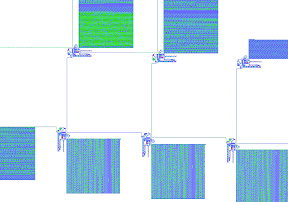 And there were other exciting developments in the field too. As I've mentioned here before, we only got these 1950's patterns running in 2008, so it's pretty remarkable that Greg Egan was able to predict that from 1994!


* Will Stevens gave a talk at ALife 12 on his machine. More details here.
* Adam Goucher's machine is Boustrophedon-replicator, in the JvN folder in Golly.
* Greg Egan is still updating his FAQ on the book.

If you're on a spaceship accelerating at 9.8 metres per second per second you will feel the same weight as if standing on Earth. This is the equivalence principle at the heart of general relativity. It would also be a convenient way for Earth humans to travel.

It's also remarkably fast. Assuming you have a power source capable of sustaining this acceleration, after one year of travelling your speed will be 300 million metres per second (670 million miles per hour), almost exactly the speed of light.

This means that just by standing on Earth for one year you have experienced enough acceleration to propel you to light speed.


* Fun Google query
* I've just finished re-reading the excellent Boat of a Million Years by Poul Anderson. Highly recommended.
* I'm ignoring the fact that as you approach light speed your mass increases, so it takes an increasing amount of energy to accelerate you. So you'll never actually reach light speed in practice.
* Image source 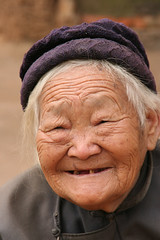 Newspapers love the idea of the "combined age" of a group of people, you see it all over:

Of course it's not very useful if you don't know how many people are in the group. But it got me to thinking, what's the combined age of the human race at the moment?